Located at the bottom of the valley in the westernmost part of the department of Oise the Priory of St Arnoult and its garden will delight visitors who love history and nature.

Visit of the free garden from 14h to 18h concert to 18h participation:15 euros per person (places limited). Shared meal (everyone brings sweet or savory)

The garden of the Priory of St Arnoult is located on the original space of the courtyard closed by the operating buildings, most of which perished in a fire in 1976. A hedge has been replanted in the linear of these timber-framed buildings, which, before the fire, housed the barns, the press, the sheepfold, the charreterie, restoring the courtyard to its original size.
The will of the owners was to highlight this working space around its pond and to make sensitive the dialogue that is established between the plant and the architecture.
The plant is here often spontaneous and in harmony with the elements of the building that are wood, earth, flint and brick.
The garden of the Priory is in no way a garden of collection, nor a garden of scholarly composition but is intended to be a natural garden.
Garden of transition between the large surrounding landscape, witness to man’s desire to control his environment and a desire to return to a wild nature in a world that is becoming increasingly urbanized and standardized.
The choice of the vegetable palette obeys this desire to give free rein to nature as much as possible. Today, it includes nearly 400 varieties of plants known since ancient times, which have become established and acclimatized and have been identified as to their origin and use.
The simplicis herba as they were called in the Middle Ages as opposed to the complex potions offered by the learned medicine of the time were used for their medicinal properties.
Many constitute by their therapeutic principles the bases of alternative medicines such as homeopathy.
Often called weeds, the choice of its plants responds to a desire for simplicity, which places the gardener in a position of observer and discoverer of the riches of the flora left to its possible developments without excess of control, No desire for increased control.
On the side of the 15th century home, a more structured garden was built in raised squares in the spirit of the medieval gardens and behind the home, at the foot of the long original tile roof that descends to the ground, the visitor discovers a space arranged around baptismal fonts of the XII century creating a claustral atmosphere that recalls the religious history of the building.
A walk allows to perceive different atmospheres and to have multiple points of view on the site and the home of the Prior whose facade opens to the east with two levels of corbelling carved symbolic motifs where the plant is omnipresent.
At 6pm concert of Alexandre Théodoulides
For more than ten years, Alexandre Theodoulides has been working to safeguard a precious, limited and fragile heritage: the ancient pianos, also known as historic. It thus constituted one of the most important collections of France. All different and representative of the 19th century, the golden age of the piano, the instruments are restored and then resume the way of the concert.
It is on a Henri Herz piano of 1854 that he proposes a program "Consolations" dedicated to works by Chopin, Liszt, Schumann and Brahms.
Participation in the concert 15 euros/pers
Shared meal at the end of the concert (everyone brings salty or sweet and drink)

With a surface of 7000 m², the garden of the Priory, with its manor of the fifteenth century, consists of a courtyard planted where the vegetal highlights the central pond and the architecture made of panels of wood, of cob, flint and brick and a small garden of medieval inspiration created in 2012. 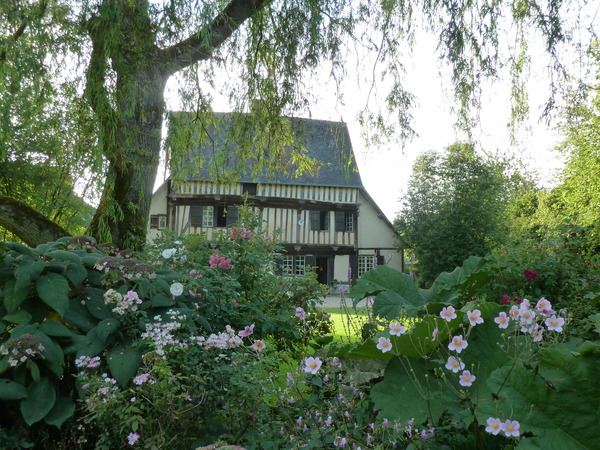