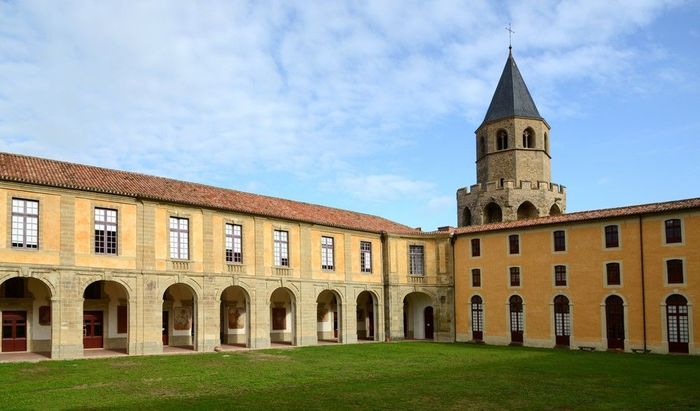 Discover the Abbey-school of Sorèze Entrez in a historical monument listed(classified) in prestigious past. This abbey Benedictine, based(established) in 754 at the foot of the Black Mountain, owes its fame to the mode of innovative education(teaching) which it practises from the XVIIth century up to its closure(lock) in 1991\. Her reputation is such as she is established under military royal Louis XVI École and receives(welcomes) in her walls of the pupils of all continents. It is managed in the course of the XIXth century by R.P. Lacordaire. A museographic route(course) stages places and objects which manifest the history(story) of this prestigious site. Realised from archive documents and from objects kept(preserved) in the Abbey-school, subject(words) alternates between:
* Panels(Signs) of historic information
* Places restored in their home state as the room of the Famous, the room of the Guards, the frescoes of the (old(former) auditorium Italian-style theatre) and oil of the gallery - cloister following the court(yard) of the red
* Spaces of réinterprétation Travel(Browse) «the Dom Robert museum and the tapestry of the XXth century» Opened in spring on 2015, this museum occupies 1500m ² building(ship) done up in a spirit at once contemporary and respectful of heritage.
Dom Robert (1907-1997) monk Benedictine of the Abbey of In Calcat located in Dourgne in the Tarn, is one of masters(teachers) of the tapestry of the XXth century. After his(its) meeting with Jean Lurçat in 1941, he(it) participates in the revival of the tapestry of Aubusson. Its work abundant and very coloured draws inspiration from nature and elates the flora and fauna of the Black Mountain, ultimate foothills of the Massif Central. It is in this natural environment included into the regional Nature park of High Languedoc that opened the museum which is dedicated to it within the old(former) Abbey-school of Sorèze, located a few kilometres away from Dourgne. The muséographie allows to understand(include) the process of creation of a tapestry, since the drawings of the artist up to finished(ended) work, via(including) the creation of the tapestry cartoon. The route(course) emphasises moreover the work of the lissiers of Aubusson, whose exceptional know-how is recognised Intangible Heritage of the humanity by the UNESCO since 2009\.
The Abbey-school of Sorèze is the place of a rich cultural and tourist activity, recognised centre of rural excellence, big(great) site of Midi-Pyrénées and labelled House of the Famous and Plus family today, where art, knowledge and nature conjugate.